Here is a post my friend Scott found and posted on Facebook this morning.  I thought it was fitting to post here.  It is a video of the making of the Haunted Mansion Organ music.

The Haunted Mansion with Walt

I stumbled across this and thought it was fitting to share.  People have designed the Haunted Mansion in LEGOs.

There is also a Design Group for this project where people can go and collaborate about other ideas focused on the Haunted Mansion.

Since my running blog is built upon my love of the Haunted Mansion at the Disney Parks, I found this trick that is used in the attraction, and thought I would share it.  Pretty neat stuff!

The experience: The Grand Hall plays host to a dinner party, complete with birthday cake, music and dancing ghosts that seem to glide gracefully around the dancefloor.

How it works: This is one of the most famous Disney effects of all, but the company didn’t invent the technique. In fact, the “Pepper’s Ghost” illusion is based on a term coined in the 1800s by a professor of chemistry at the London Polytechnic Institure.

The ghosts that you see dancing and celebrating in the Grand Hall are actually animatronic figures in black rooms above and below the mezzanine that your Doom Buggy is on. There is a gigantic pane of glass between the riders and the Grand Hall. A light source shines on the animatronics below, which reflects them off of the glass and makes it appear as though they’re actually in the Grand Hall.

You can even test this method for yourself, by following the steps below:

At 30 by 90 feet, the Haunted Mansion has the largest Pepper’s Ghost setup in the world. The Disney team actually made a mistake when setting this scene up. The dancing animatronic figures were created to have the men lead but, when reflected in the glass, the women lead.

Inside The Mouse House 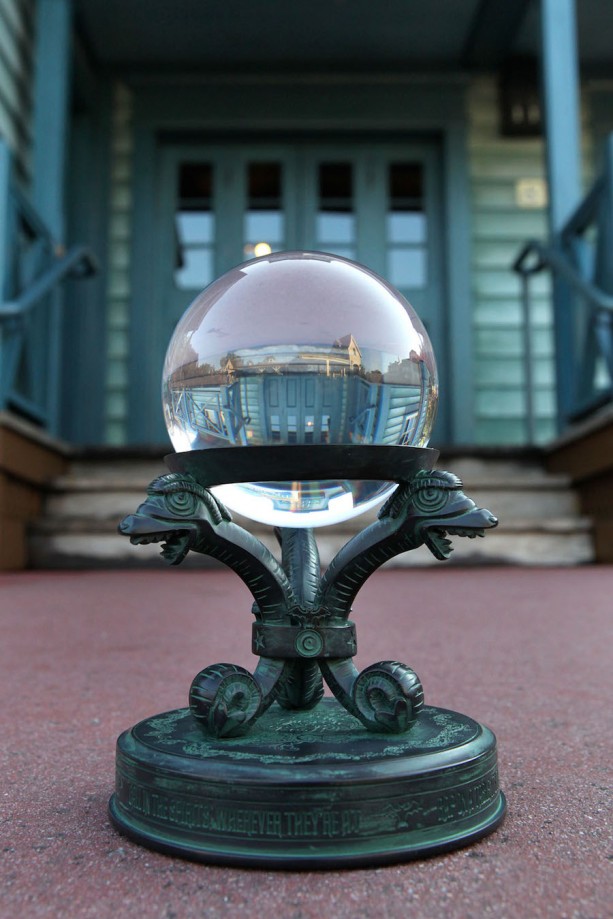 I’ve enjoyed hearing from guests who are just as excited as me for the new Haunted Mansion products coming this fall to Disney Parks. As it turns out, Madame Leota and the 999 happy haunts from the Haunted Mansion attraction have also received your sympathetic vibrations. This fall, they are gathering to open a new merchandise destination in Liberty Square at Magic Kingdom Park in Florida.

The new merchandise shop will be located in the current Yankee Trader shop, which will have its last day of operation on July 27, 2014. Inspired by Madame Leota, the new location will carry select items from the upcomingHaunted Mansion Authentic program including apparel, home goods, souvenirs, and more.

Final arrangements are still being made, so I invite you to keep watching the Disney Parks Blog

Inside The Mouse House

I know the excitement is building as fellow Disney Parks Blog author Steven Miller continues to share the latest news on Haunted Mansionmerchandise materializing in Disney Parks. I can hardly believe that in just a few short weeks, we will be celebrating the 45th anniversary of the Haunted Mansion attraction, one of the crown jewels ofDisneyland park. There is so much history behind the attraction itself, its famous and infamous residents, and the storytellers and artists that brought it to life.

Over the years, I was fortunate enough to meet some of the Disney Legends and artists behind this attraction and the inception of Disneyland, and it’s something that will live in my heart forever. I know many of you feel the same way. Senior Merchandiser, David Whitaker…

I found this on the Disney Blog and thought I would pass along a little Haunted Mansion fun, since that is the backing behind my running blog.

There are a total of 11 hidden Haunted Mansion-inspired words hidden in the puzzle above. How many can you find?  If you find others, post them in the comments.

Don’t Peak but hear is the answer key.

The Journey Of Ascent

My Path, His Call, Our Adventure

MLB.com's Carrie Muskat has been covering Major League Baseball since 1981 and is the author of "Banks to Sandberg to Grace: Five Decades of Love and Frustration with the Cubs." You can follow her on Twitter @CarrieMuskat. Here, she blogs about the Cubs.

Running, Life, & Everything In Between

Will Run for Ears

The excuse I used to go to Disney...and change my life!

Odes to the roads & tales from the trails

My transformation from Depressed Couch Potato to Disney Runner

Kona or Boston? Which comes first?

An active mother's guide to life.

My great Wordpress blog
...Just Me and My Running Shoes...

Running through life and hoping to learn a few things along the way!

The Journey Of A North Essex Runner

Running long distances across the country